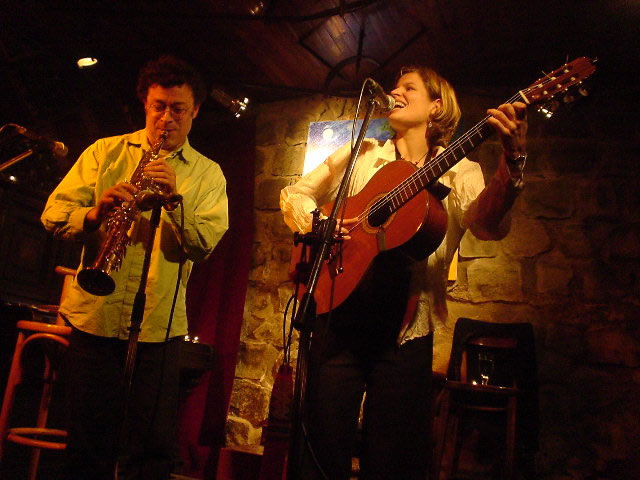 The concert was AWESOME!!!!!!!!!! Everyone who came to the concert, loved it really much. Many people bought her and Pedro's CDs. The music and songs were great. People even got chance to talk to Laura and Pedro, and they even got their autographs.

Please tell Laura and Pedro, thanks from the International Cultural Organization.We all really enjoyed it.

My name is Amber Collazo and I am secretary of the International Cultural Organization at the University of Alabama in Huntsville. We were so lucky to have Laura and Pedro for a concert this past Wednesday. My parents are from Puerto Rico, so I was very excited to bring an event specifically concentrated on Latin American culture to our campus. Unfortuntately, I did not get a chance to meet her personally because I was a little too shy, but I was able to watch the concert. She and Pedro did an absolutely amazing job! Everyone I spoke with afterwards shared my sentiments. The sounds were so unique and pure. Laura has a beautiful voice and Pedro's skills with his instruments were incredible. The songs, ranging from calming and soothing to upbeat melodies, and incorporated so many beautiful different sounds from the instruments, really touched my heart. It has truly been one of the best concerts I've been to. Also, Laura's words and songs were very poetic, and she was so warm and friendly to us. She was very understanding about our advisor, Dr. Youman's death and offered very heartwarming and sympathetic words. We greatly appreciate it. I wasn't able to join her with the group afterwards for dinner at the Indian restaurant because I had to study, but I am kicking myself now. I heard that they had a great time! Hopefully, we can have her back again next year.

Thank you very much,
Amber Collazo

(the following review can be found at its original location: http://www.nd.edu/~observer/10162002/News/0.html)

The trio played Latin American music that had African, European and pre-Columbian influences.

"We're calling on these roots, music that was hidden for a long time," said Fuentes. "Latin American music is too big and varied to fall under one name."

Calicanto helps to bridge gaps between varieties of cultures through expressive music.

The band's songs included sounds from countries such as Chile, Mexico and Venezuela. Laura Fuentes, Pedro Villagra and Tomás Gonzalez Jansana combined their own styles and expressions of music into their performance, creating a sound that brought together a diversity of cultures.

Along with entertaining, Fuentes provided information about the history of the music and its origins. The performers also explained the roots of the instruments.

"[Today's music] may be modernized, but the roots are still there," Fuentes said.

Participants were able to see the combination of many cultures through songs and discussion.

At the end of the performance, there was a question-and-answer session in which audience members were able to express their thoughts about the event.

"Multicultural events are a good way to experience other customs and styles of music," Megan Canzoneri said. "Their visit allowed students to become more aware of cultural differences. [Laura Fuentes y Calicanto] shared their knowledge with us and made us experience other worlds."

The Brown Bag Luncheon with Laura Fuentes y Calicanto was sponsored by the Office of MultiCultural Affairs, La Fuerza and the Spanish Club.

I'm going to forward a great comment from one of our faculty members, so please pass it along.

"Dan-
There are not appropriate words in the English language, nor the Spanish for all I know, to express my sheer delight, wonder, and amazement at having Laura en troupe' in my classroom. The students were spell bound. Laura had a presentation style that was very informative, encouraged questions, class participation, and expertly sampled the unique talents of her trio. It was AWESOME and a real 'chance of a lifetime' to see and hear this type of music up close and personal. I know many will go to the concert...but in my opinion, it was worth the cost of their entire engagement just to have them in my music appreciation/world music class. THANK YOU Sooooo much! I wish i had the funds to purchase more folk instruments personally so I could show them in class along with our listening. I was inspired to "dream of traveling to South America myself" and searching out remote villages to find even more folk melodies while experiencing this marvelous music culture first hand.

In 1996, Laura Fuentes, along with her husband Pedro Villagra, created a duo musical group called Laura Fuentes y Calicanto. Blending an array of music from Latin America, Laura Fuentes and her group have traveled all over the United States touring colleges and universities. Siena Heights University was honored by their presence on Monday, October 8.

Laura Fuentes y Calicanto presented authentic music from different Latin American countries such as Chile, Mexico, Brazil, Venezuela, Argentina, and Peru while playing several instruments simultaneously. It was absolutely the most amazing concert ever at Siena Heights University. All of the students and faculty in attendance were astonished by their great performance that evening.

Laura Fuentes was born in Santiago, Chile to North American parents. In 1973, she was forced to move into exile. Her family fled to Madison, Wisconsin. In that time, Fuentes could not give up the culture she grew up with and began performing and singing in Madison. After high school, Fuentes continued her musical education and graduated from the University of Wisconsin. Later, she moved back to Santiago, where she resides presently. Her husband, Pedro Villagra, was born in Contulmo, Chile. During the military regime in Chile, he formed the band Santiago del Nuevo Extremo, which became very influential and important during the 1980s.

Frequently, the band will invite one or more individuals to participate in some of their concerts. Usually, the guest lives nearby the area where the band will play. The person will help them out with the variety of instruments that they like to use such as guitars, drums, flutes, the Venezuelan cuatro, quenas, quenachos, the sikus, madolins, saxophones, and cajons.

At every concert, the band encourages the audience to join in by clapping their hands to the beat of the music, playing some of the instruments, and singing along to the chorus. All of the songs performed have a deeper meaning that Fuentes explains before she begins to sing each song. The love song, Caramba, mi amor and the acapella performance of Grillos were the two songs that wooed the crowd and made them fall in love with the culture of Latin America.

Impressed by the performance, Dr. Renato Gonzalez expressed, "The show was outstanding because of the incorporation of all the instruments from the native countries of Brazil, Chile, and Venezuela, along with the representation of diverse Latin American countries. Throughout their music, there was a message to love and understand multi-cultures and to appreciate all of their contributions." One of the many Spanish students in attendance that night, Torrey Navarre stated, "Me gusta las buenas canciones."

Overall, this concert sparked a genuine interest for all the people in the audience to learn more about the culture of Latin America musically and historically. Laura Fuentes y Calicanto brought Latin America to Dominican Hall.

"Laura Fuentes' sweet voice made the music live . . .the audience participated warmly and took with them the emotion and the message."

"Just a brief note to say, "Thank you!" The concert was absolutely wonderful: a great gift to those of us who dearly miss the poetry and the beauty of our Latin world. Thank you for a most delightful evening!!!!"

-Eric Benjamin,
Director of the Multicultural Center
University of the South , Tennessee